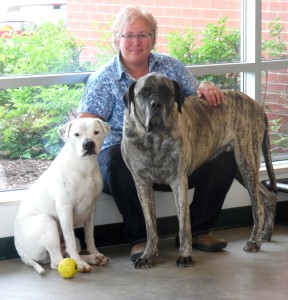 Tari started grooming in 1988, is a Certified Master Groomer, has taught at two grooming schools and participated in and placed at grooming competitions. Her career has always been in the animal industry; owning a full-line pet shop, three grooming salons, having taught obedience classes and done in-home training for obedience and behavior modification for over 25 years.

She has shown dogs in breed conformation and obedience, has helped train hunting dogs and competed in AKC Field Trials and Hunt tests for pointing breeds and owned German Wirehaired Pointers for 20 years and Standard Wirehaired Dachshunds.  Tari enjoys trail riding and camping with her Tennessee Walking Horses as well as spending time around her hobby farm.  She is a proud parent of two grown children and loves being Granny to Beau and Wyatt!

Paws and Claws has grown into a much larger reality than originally anticipated, thanks to the wonderful reception it has received from pets and their owners in Hudson and the surrounding communities.

Paws and Claws expanded with a second location in Stillwater, MN which opened in 2007.  That location was sold to a long time employee in April 2014, wishing her continued success.